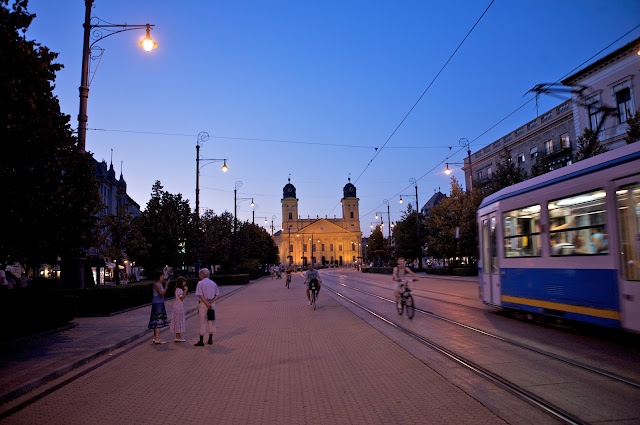 Visiting Hungary most of tourists discover Budapest. Yes, certainly Budapest is beautiful. But if You have enough time and  are interested in hungarian countryside, You have to see Debrecen as well, east of Danube and even east of Tisza. Debrecen is the second biggest historical town in Hungary, famous of many festivals, churches, and a football club.
When I heard first time that somebody would launch a fine dining restaurant in Debrecen ( IKON Restaurant) I was very sceptic. How come, men? Why? Does anybody know in Debrecen what fine dining means? Anyway, who would be the members of the staff? And I was also wondering who was so brave and gourmet invested his money into such a risky business. I didn’t wait for the answers for a long time, I tried to check myself what was done there.
The restaurant is spotted on the main street close to Big Church. Simple and elegant in style: that is the first impression. No excessive design, no extravagance. Like a real fine dining restaurant. 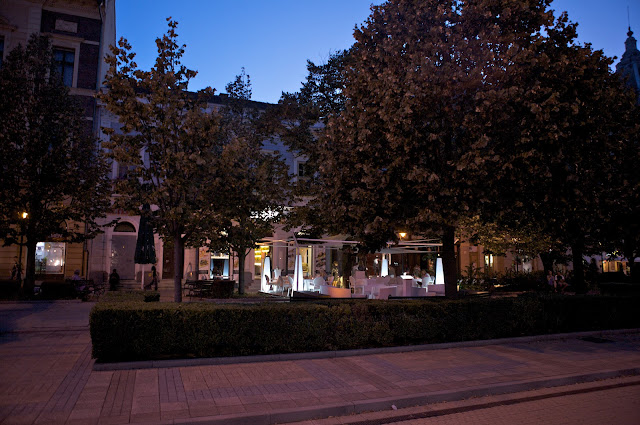 During the hot summer You can reserve your table either outside or inside. It’s commodious and light  inside with a huge collections a of wine bottles displayed on the walls- amazing combination of decoration and a built-in sommelier. Tableware is excellent and impeccable. The staff wear black as expected and are very polite. It’s quite rare in Hungary 🙁 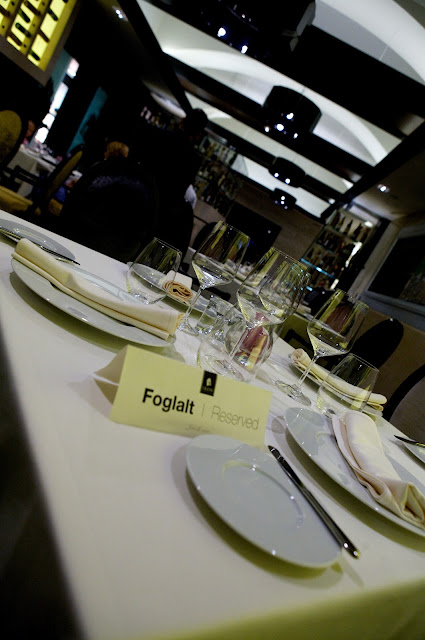 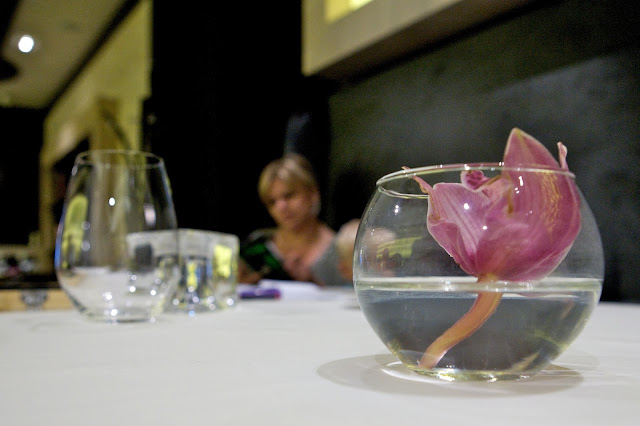 We arrived with kids, so table reservation had been required in advance. In Hungary visiting a restaurant with kids is smoother than in Britain, but not always! But IKON is prepared to children guests , and offered for them pencils, working books, and so on. At this point I felt we were spoiled, although had not been tasted anything, yet! 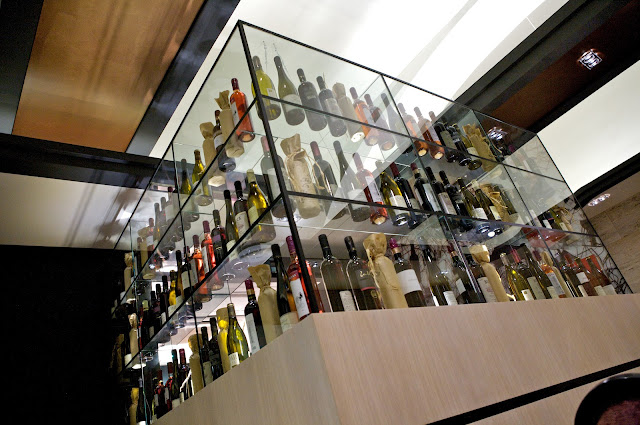 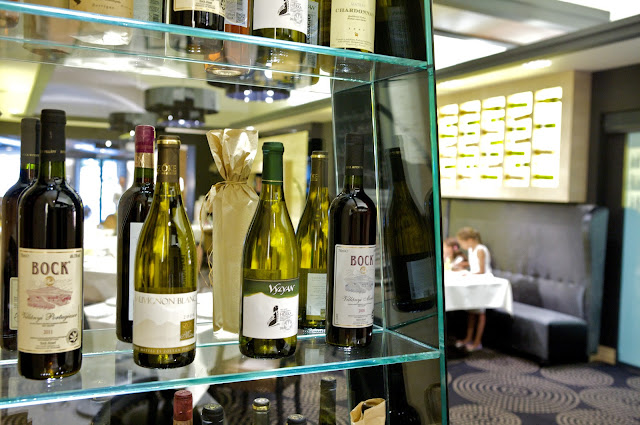 Menu card is very impressive, most of the meal is designed on hungarian traditional flavor and taking into a modern implementation with creative twist!
After a short discussion we ordered the tasting menu: I wanted to taste as much as possible!

Before starter fresh, home baked white and dried tomato bread was served with butter. All of us loved it!

After then Amuse bouche arrived: it was a ball, made of a sort of hungarian quark mixed with spinach and then spinned into ground almond and poured over with salted caramel. On the top of them a hint of cress was placed. Overall this bite was very special, both the sweetness and saltness were well balanced. 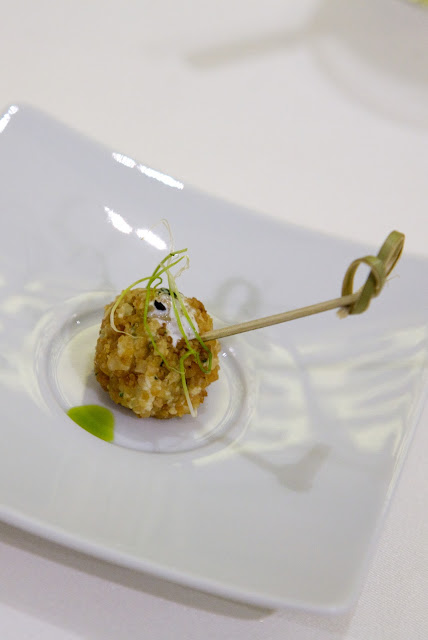 After then Grilled foie gras with nectarines, home baked brioche was served. I have already eaten foie gras several times in different combination but this meal was really impressive- golden brown outside, silky inside, laid on a crusty brioche slice, and under the brioche nectarine had been taken. If I had had any complain of the foie gras that would be the baking time. 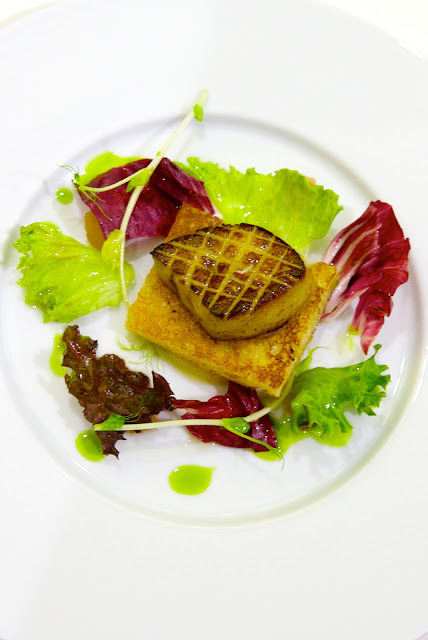 Mean while our kids were also served with chips and breaded chicken. Chips were not frozen ones!  Lovely! And the chicken was also a good quality hungarian chicken grown up not far from Debrecen on counrtyside. 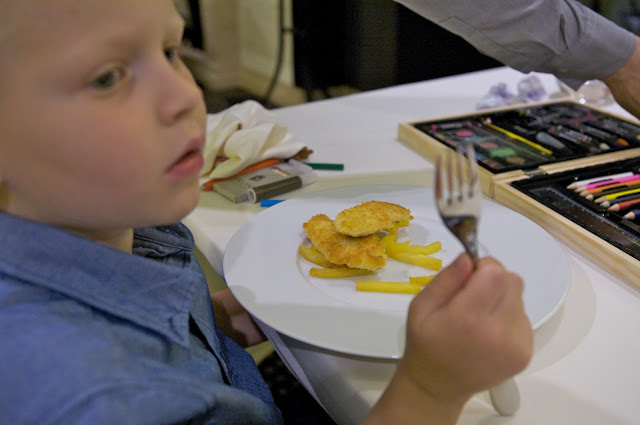 Coming to this course I felt the chef had to implement all of his skills: generally I do not like marrow, but I’m a big fan of seafoods, and usually purees are not my favourites, I don’t like this kind of textures on my plate. Anyway the chef had done an excellent job! The perch fillet was fished in Tisza, neer Debrecen, the smoked black mussels came from a bit farer, but the magic he made with marrow was unbelievable. Marrow was sauteed on butter with dill, so it was crispy instead of overcooked. So it had  freshly look and flavour. Fennel puree was a bit sweeter than expected, nevertheless the look of that on plate reminded of the loops of river Tisza, the golden brown pike perch brought back the mood of restaurants on riverside, so overall this course was a winner choice. 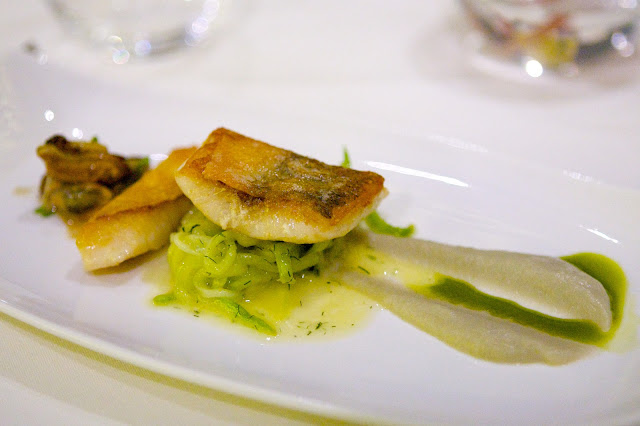 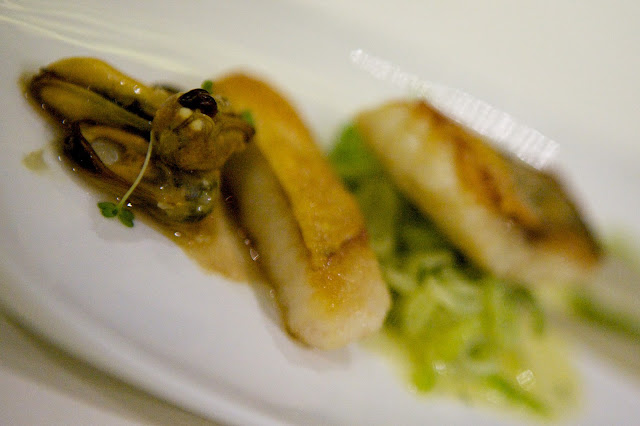 Sorbet was made of forest fruits. 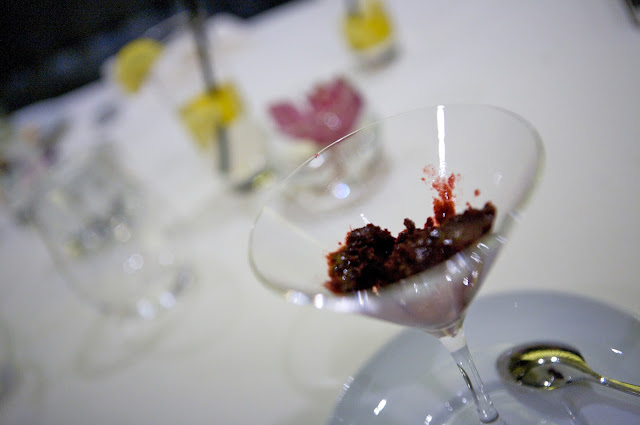 On the tasting menu card two main course were offered, we tried both of them of course.

Filet mignon from 6 weeks matured Charolais with truffle mash, sweetbreads and pickled shallot
I had travelled all around the world and I was so lucky that  I tasted the famous  steak not only in the USA, but in Argentina as well. But tasting this fillet mignon it was as wonderful as on the pampas! As tender as required. I was wondering where the meat  could have been matured. The answer was, right in place.
Duck breast cooked pink, roast potatoes and blueberries

The duck was really nice, I usually leave it a bit more on the rose side, though. Sometimes side dish  can overtake and become a leadership: the roast potato was more than memorable: a unique, fine texture, reflecting the consistency of the meat and placing a transition between the duck and the outlining berries. regrettably no idea how it was proceeded. 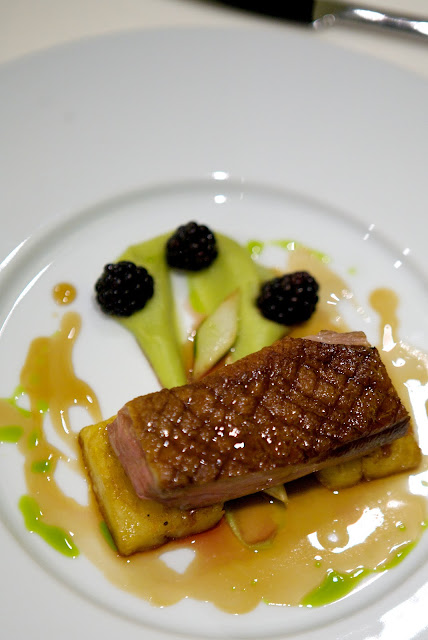 I had an opportunity to liaise the chef, Peter Pataky. Peter had worked abroad, also in UK and France , but one day he decided to come back in Hungary. His ars poetica is to use in his kitchen seasonal vegs and fruits, spin up the traditional hungarian meals and prepare them in a helathier way.

The restaurant was opened in May, and the number of their guests is growing rapidly. From my point the “fine dining” is a grey spot in Eastern Hungary, so his challenge is to change the stacked hungarian eating habits and revitalize the famous traditional hungarian kitchen at the same time! Looks to be triumphant- or just on a British understatment: so far so good!
There has been a lot of things worth to visit in Debrecen: Flowerfest, Big Church, Agriculture Exhibition and so on, but furthermore Restaurant IKON also takes place among them. Peter’s creativity was introduced in the tasting menu, but on menu card I discovered many other attractive courses, for example Risotto with baked pepper or Rabbit in white wine with home made pasta filled with broccoli, blucheese, and carrots.
I really hope that enthusiasm and commitment of the team will remain the same, and they will be able to present their creativity in fine dining and show the guests that eating is not about the quantity of the meal, rather the quality of products are used and also the recognition and pleasure of the hospitality and care of people who are courageous enough to amusing and feed us in a different way.